Below are the books authored by Catherine Keller. To see all of Dr. Keller’s book publications, including edited volumes, click here. 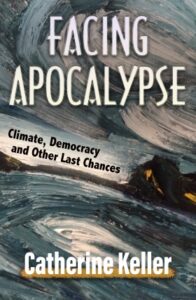 The actual meaning of the word “apocalypse” is not “disaster” but “unveiling.” Drawing on John’s prophetic Apocalypse, Keller unveils a “dreamreading” of our current global crisis—particularly the threat of climate change and ecological devastation. John’s text is not a foretelling of future events, but a parable of our present reality, which exposes the deep spiritual roots of these threats.

“Catherine Keller succeeds in confronting the terminal forces of destruction of our present time with the message of the mysterious and terrifying Book of Revelation. A brilliant work taking the apocalypse in the double sense of the word as revelation and end-time seriously, full of surprising discoveries.”—Jürgen Moltmann

“This book plays wonderfully between ‘the overstated and the unspeakable,’ to reveal deep patterns between the world of John’s apocalypse and our own, calling us to the possibility of a last chance for our increasingly uninhabitable planet.”—Kathryn Tanner, Yale Divinity School

“Delivers a chilling, occasionally thrilling, and always arresting rumination on that most alien, yet never more relevant, biblical book—the book that tells us we must mend or end.”—Stephen D. Moore, author, Untold Tales from the Book of Revelation

“Catherine Keller is one of the greatest living theologians and in Facing Apocalypse she opens up that oft-hidden and neglected text of John’s Apocalypse, horses, dragons, and all. . . . Read this book and don’t be left behind.”—Tripp Fuller, host, Homebrewed Christianity Podcast

Political Theology of the Earth: Our Planetary Emergency and the Struggle for a New Public 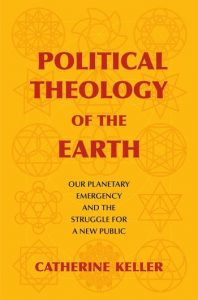 Amid melting glaciers, rising waters, and spreading droughts, Earth has ceased to tolerate our pretense of mastery over it. But how can we confront climate change when political crises keep exploding in the present? Noted ecotheologian and feminist philosopher of religion Catherine Keller reads the feedback loop of political and ecological depredation as secularized apocalypse. Carl Schmitt’s political theology of the sovereign exception sheds light on present ideological warfare; racial, ethnic, economic, and sexual conflict; and hubristic anthropocentrism. If the politics of exceptionalism are theological in origin, she asks, should we not enlist the world’s religious communities as part of the resistance?

Keller calls for dissolving the opposition between the religious and the secular in favor of a broad planetary movement for social and ecological justice. When we are confronted by populist, authoritarian right wings founded on white male Christian supremacism, we can counter with a messianically charged, often unspoken theology of the now-moment, calling for a complex new public. Such a political theology of the earth activates the world’s entangled populations, joined in solidarity and committed to revolutionary solutions to the entwined crises of the Anthropocene. 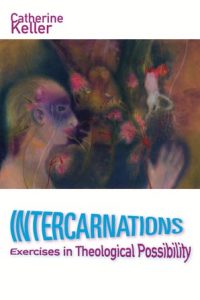 Affirmations of body, flesh, and matter pervade current theology and inevitably echo with the doctrine of the incarnation. Yet, in practice, materialism remains contested ground—between Marxist and capitalist, reductive and postmodern iterations. Current theological explorations of our material ecologies cannot elude the tug or drag of the doctrine of “the incarnation.” But what if we were to redistribute, rather than repress, that singular body? Might we free it—along with the bodies in which it is boundlessly entangled—from a troubling history of Christian exceptionalism?

In these immensely significant, highly original essays, theologian Catherine Keller proposes to liberate the notion of the divine made flesh from the exclusivity of orthodox Christian theology’s Jesus of Nazareth. Throughout eleven scintillating essays, she attends to bodies diversely religious, irreligious, social, animal, female, queer, cosmopolitan, and cosmic, highlighting the intermittencies and interdependencies of intra-world relations. According to Keller, when God is cast on the waters of a polydoxical indeterminacy, s/he/it returns manifold. For the many for whom theos has become impossible, Intercarnations exercises new theological possibilities through the diffraction of contextually diverse multiplicities.

A groundbreaking work that pulls together a wide range of intersecting topics and methodologies, Intercarnations enriches and challenges current theological thinking. The essays reach back into feminist, process, and postcolonial discourses, and further back into messianic and mystical potentialities. They reach out into Asian as well as inter-Abrahamic comparison and forward toward a political theology of the Earth, queerly entangling climate catastrophe in materializations resistant to every economic, social, and anthropic exceptionalism. According to Keller, Intercarnations offers itself as a transient trope for the mattering of our entangled difference, meaning to stir up practices of a better planetarity. In Intercarnations, with Catherine Keller as their erudite guide, readers gain access to new worlds of theological possibility and perception.

Cloud of the Impossible: Negative Theology and Planetary Entanglement 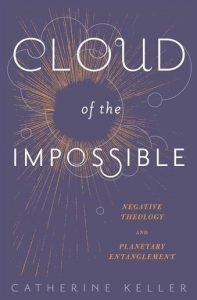 The experience of the impossible churns up in our epoch whenever a collective dream turns to trauma: politically, sexually, economically, and with a certain ultimacy, ecologically. Out of an ancient theological lineage, the figure of the cloud comes to convey possibility in the face of the impossible. An old mystical nonknowing of God now hosts a current knowledge of uncertainty, of indeterminate and interdependent outcomes, possibly catastrophic. Yet the connectivity and collectivity of social movements, of the fragile, unlikely webs of an alternative notion of existence, keep materializing–a haunting hope, densely entangled, suggesting a more convivial, relational world.

Catherine Keller brings process, feminist, and ecopolitical theologies into transdisciplinary conversation with continental philosophy, the quantum entanglements of a “participatory universe,” and the writings of Nicholas of Cusa, Walt Whitman, A. N. Whitehead, Gilles Deleuze, and Judith Butler, to develop a “theopoetics of nonseparable difference.” Global movements, personal embroilments, religious diversity, the inextricable relations of humans and nonhumans–these phenomena, in their unsettling togetherness, are exceeding our capacity to know and manage. By staging a series of encounters between the nonseparable and the nonknowable, Keller shows what can be born from our cloudiest entanglement.

On the Mystery: Discerning Divinity in Process 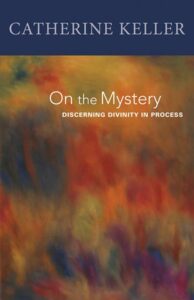 With immediate impact and deep creativity, Catherine Keller offers this brief and unconventional introduction to theological thinking, especially as recast by process thought. Keller takes up theology itself as a quest for religious authenticity.

Through a marvelous combination of brilliant writing, story, reflection, and unabashed questioning of old shibboleths, Keller redeems theology from its dry and predictable categories to reveal what has always been at the heart of the theological enterprise: a personal search for intellectually honest and credible ways of making sense of the loving mystery that encompasses even our confounding times.

The Face of the Deep: A Theology of Becoming 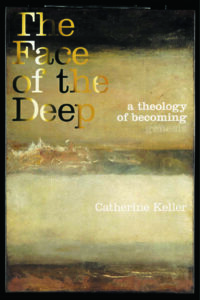 This is a groundbreaking, highly original work of postmodern feminist theology from one of the most important authors in the field. The Face of the Deep deconstructs the Christian doctrine of creation which claims that a transcendent Lord unilaterally created the universe out of nothing. Catherine Keller’s impassioned, graceful meditation develops an alternative representation of the cosmic creative process, drawing upon Hebrew myths of creation, from chaos, and engaging with the political and the mystical, the literary and the scientific, the sexual and the racial.

As a landmark work of immense significance for Jewish and Christian theology, gender studies, literature, philosophy and ecology, The Face of the Deep takes our originary story to a new horizon, rewriting the starting point for Western spiritual discourse. 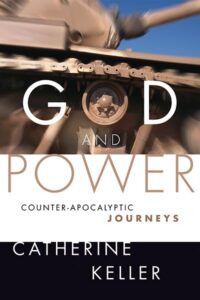 The questions raised by use of American power and the advent of an “American empire,” Keller argues, reveal a deeply troubled political unconscious that is wrestling with basic religious issues of power, terror, territory, and love.

Keller traces our response to the current national, international, and religious situation to the deeply fraught legacy of Christian apocalypticism. Religious and political factions both left and right, she argues, read our situation in apocalyptic terms without truly understanding that complex legacy.

After diving deeply into the multiple and conflicting political and religious meanings of the Book of Revelation, she proposes a counter-apocalypse, an anti-imperial political theology of love.

Apocalypse Now and Then: A Feminist Guide to the End of the World 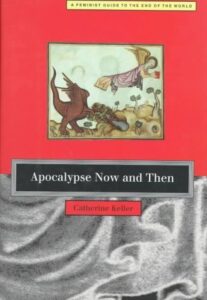 In this major new work, Catherine Keller brilliantly explores the ways that the Christian prophecy of apocalypse – the fiery end of the world on Earth – has shaped Western thought and history. Through innovative readings of the Bible, theology and philosophy, feminist and poststructuralist theory, fiction and poetry, Western history, and current politics, Keller shows how the myth of the apocalypse has shaped our basic habits of text, time, place, community, and gender. Apocalypse Now and Then reveals the apocalyptic links of movements and events as diverse as colonialism, urbanization, nineteenth-century American feminism, and the current environmental crisis. Throughout the book, Keller constructs an imaginative counter-apocalypse that neither abdicates the prophetic passion for justice nor surrenders to the doomsday dualisms of the apocalypse.

From a Broken Web: Separation, Sexism, and Self 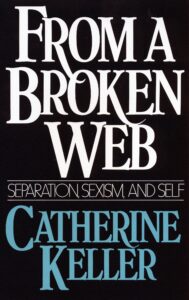 “What a wonderful book Catherine Keller is offering us! With creative boldness she has involved herself in a vision of self that cannot arise without an in-depth consideration of gender, including female identity.” – Nelle Morton

“A spirited critique of Western philosophy, psychology, and religion [with] hopeful intimations of the post-patriarchal self.” —Charlene Spretnak

Is this the apocalypse?